An interview with Natalia, a former team member and friend of 100% LIFE, our campaign partner in Ukraine, and life-long activist.

‘AIDS was the 20th century plague’, that’s what the posters in all the health clinics told us. ‘A death sentence’. The doctors backed it up when they gave me my diagnosis and prognosis: ‘HIV positive’, they said, ‘don’t expect to live more than two years’. 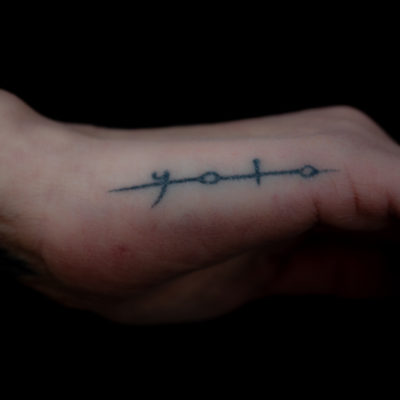 “You only live once – so live it – and help others to live theirs” – Natalia.

I went and got a hit. There was no point in giving up drugs now, I was dying anyway.

My mum found enough strength to smile when I told her, to try and support me. I’d always just wanted her to be proud of me. Now I was not only a drug user, but one that was dying. I was the cause of her pain. I know she never stopped loving me me, but she started to worry about risks, us using the same dishes for example. She was a health worker, but back then it didn’t mean they knew any more than the general public. It was ‘something that happened in Africa, not here’.

I felt a great emptiness.

Two years later, I was still alive, and I decided to go to rehab.
I was 26 when I was diagnosed, and that was 23 years ago, so, fortunately for me the doctor was wrong.

There was so much we didn’t know about HIV. Unfortunately we lost too many people that should still be alive as treatment came to Ukraine later than many other countries. In 2000, I became aware that treatment did exist but I couldn’t have it – and it would still be a few more years before I could.

I told my mum, that there will come a day when she will be proud of me. In 2001, after successfully completing rehab, I was invited to 1+1’s TV studio, to talk on the morning breakfast show. It was in May, the month of the International AIDS Candlelight Memorial, and the programme was dedicated to people who had lost their lives to HIV.

I talked about my HIV status; how my first concern was how my mum would cope with the news; that HIV is among us; but there are programmes that exist to support people; and WE CAN SAVE LIVES. Saving lives was an important part of my motivation to go on TV, but it was also important that my mum would believe in me. My mum lives in Poltava, 300km from Kyiv, I phone her. She told me, “I watched you and I’m SO proud of you”. There were tears!

“I believe a positive mental attitude is important, if I was to feel sorry for myself that would only make things worse” – Natalia.

When came to work for 100% LIFE (formerly the All-Ukrainian Network of People Living with HIV) I visited other countries for work, Germany, the UK, and other places. I saw the side-effects of treatment and often it was terrible at the beginning. Lipodystrophy was one side-effect of earlier treatment, and the loss of body-fat often gave people a terrible gaunt appearance. It was in London that I got re-tested, just to be sure, to prove the diagnosis. It was positive, but this time the doctor told me, ‘this is something you can survive, you can live with it’.

“Travelling around Europe I met people already receiving HIV treatment – there were side-effects but I jumped at the chance when I was offered treatment myself a few years later” – Natalia.

In 2004 I jumped at the chance of treatment, it was a huge relief. I wasn’t concerned about the side-effects I’d seen. The people I’d met on my travels around Europe were still so positive, and attractive – and they were alive.

Due to working at the Network, I was aware that there were more developments expected in HIV medication, and on the whole I looked and felt healthy. I was inclined to be a bit on the chubby side, which I’ve always been fine with, but it meant I could afford to lose some weight!

I’m now on either my 4th or 5th treatment regimen. My current treatment is a dolutegravir-based combination treatment regimen. Dolutegravir (DTG) is widely available and affordable in Ukraine as a direct result of the advocacy work carried out by 100% LIFE to remove intellectual property (IP) barriers that block access to essential medicines.

The treatment that Natalia receives is available due to the advocacy work of our campaign partner, 100% LIFE.

I’m four weeks in to my new treatment, so it’s too early to say for sure that I have no side-effects, but it seems to be going well, and DTG generally has improved efficacy and fewer side-effects.

I believe a positive mental attitude is important, and that my reality is the one I create in my head, so if I was to feel sorry for myself that would only make things worse.

When I met the man that is now my husband, I explained to him how HIV treatment works: the fact that I have been on treatment and so my viral load is undetectable, which means the virus cannot be transmitted (U=U). He kind of knew a bit already but I explained in simple terms. I actually credit my organisation that this conversation (and relationship!) was possible, without fear or stigma. 100% LIFE has shared so much information with the general public and encouraged testing and treatment – the attitude shift is immense. We had a civil ceremony one year ago and I’m a step-mother to his two daughters.

Attitudes towards people who use drugs hasn’t caught up, it’s still more stigmatized. I’m a member of an association of drug users and sometimes, when it’s necessary to reveal that I used to inject drugs, people say it’s a joke, that it’s not true. They have an image of a ‘drug user’, or even an ex-drug user, and I don’t fit it.

It’s an ongoing fight. Every year I visit the rehab centre to say hi to the director there and let them know that I’ve been OK for another year. I’m lucky – life has been pretty good.

I designed both my tattoos based on their meaning: Om, the Indian symbol of past, present and future: and YOLO, you only live once – so live it – and help others to live theirs.